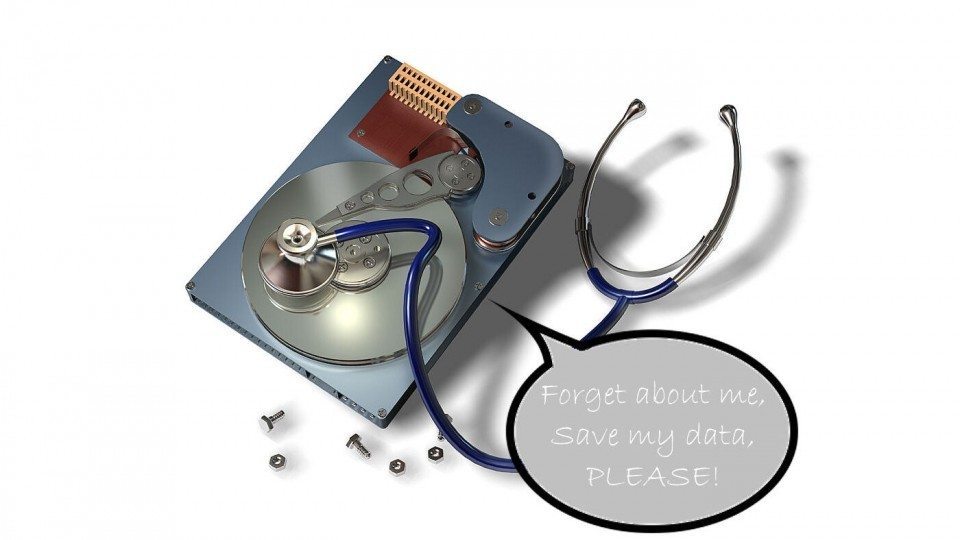 I can’t even begin to count the amount of times this application has either saved my ass or simply made my life simpler. I think it’s safe to say we’ve all at one point or another lost hair due to a failing drive or perhaps trying to copy large files from a drive (even emptying it!) to another and it’s either taken forever or we got an annoying message from Windows telling us that somehow, that file we haven’t used in forever, is in use by another application.

Let me go back 4 months. I have an external 500Gb drive, an old one at that, that came from an even older laptop, that i scavenged and since I had an IDE external usb enclosure and no longer have IDE ports in my main computer I figured, what the hell, I’ll use it for external storage. Over time I needed once central place to store my…. backups…. of movie dvds and so I “cut & paste” my collection in to. Now, have in mind S.M.A.R.T. said this hard drive was OK, CrystalDiskInfo said so too, even after I stressed the drive for 2 hours.

At 95% the I get a copy error and notice the drive is no longer detected by my PC. So I said to myself, ok That IT Guy, don’t panic. It could simply be the usb enclosure or the cable itself, both are very old, it’s not the first time I see that happening. I take the drive out of the enclosure and go through my collection of “may need it someday” parts and find a PCI IDE card. Great. I turned my PC off, installed the card (which thankfully is a relatively recent model so the drivers work on modern systems) and plugged in the drive, turned the PC on and there it is, the drive is there!… but… what is that ticking noise… oh no… the drive is gone again. Not the news I wanted, that ticking noise means the drive is on its last legs, assuming it hasn’t completed died already. 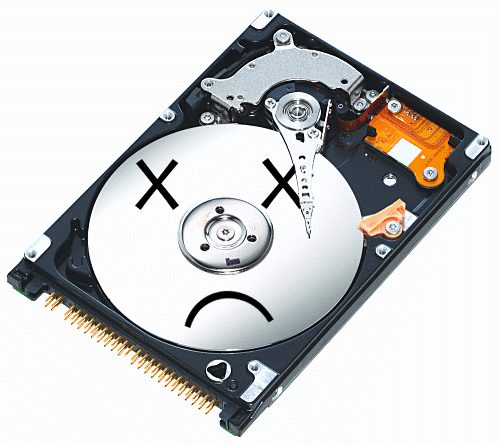 I went on to try and old trick (only do this as a last result as you’ll pretty much only get one shot, if that), I slipped the drive in to an antistatic bag, sealed it shut and in to the freezer it went overnight. The next morning I took the chilly drive out and plugged it in again. I had to keep its temperature as low as possible so I used a long IDE cable and placed the drive outside of the PC and went on to turn the PC on. Drive is detected. TIme for EaseUS Partition Master. Copy drive to another drive and cross fingers. EaseUS Partition Master managed to copy 95% of the drive before it died (and this time for good). I lost “Dude, where’s my car?” (we’re not here to talk about my film judgement, ok?), oh well.

This of course is my latest personal experience but I’ve used this application to recover data from dying drives (whatever it could get) countless times and not just that. In fact, one of the biggest use I give it is to do what so many other applications claim to be able to do but result in an unbootable drive (I’m looking at you DriveXML!) which is cloning a system drive. Perfect example of this would be the countless times I’ve upgraded PCs and specially Laptops from conventional Hard Drives to SSDs. These clients don’t want a fresh install of Windows, they want to pick up from where they left it but with a new (and fast) SSD. Not once has it failed. I take the original drive out, plug it in to my pc along with the new drive and power up EaseUS Partition Master to get the job done.

Hell, if you have the payed version (non trial) you can even do bootable pendrives for any sort of diagnostics without having to go through countless individual applications for each process. This application just makes my life simpler and at the end of the day, isn’t that what software’s for? Let’s see what the developer’s website has to say:

So anyhow, because it’s saved my ass so many times, this thursday’s application is EaseUS Partition Master (albeit, posted on Friday, because I simply was unable to had it pre-done and ready for Thursday. sorry).

Before I give you the download link (uploaded here for your convenience, as always), I’ll straight up tell you I’ve taken the chance to set up an affiliation, so if you do decide to buy it after playing with the Trial (which in many ways is actually good enough), you’ll be helping That IT Guy Scrape By (see what I did there?) out at no extra cost (win win!).

For years now I’ve been using TeamViewer in order to help people mostly. It’s specially useful when the person on the other side does not know much about computers and you just want to grab control and get it over with (funny, I can think of a few situations where this is also the case!). In simple terms, TeamViewer is a program that allows you to connect to someone elses computer.

Now now, before you go all bonkers and start worrying about someone “hacking” your Facebook account and posting something along the lines of “I’m gay” and all your friends replying along the lines of “I knew it!” or “about time you came out” stop and breathe for a second. Teamviewer uses a 9 digit user id and 4 digit password which are auto-generated and the password itself changes every time you start your computer or you close and open the program so basically it only grants access to whoever you want for a short amount of times. Also, it’s essentially as if someone else grabs the mouse so you get to see what’s going on at all times. And I’ll tell you what I tell my clients, if you feel better about it, you can simply uninstall it once the work is done and be done with it (because trust me, IT guys (and girls) have better things to do than go through your photo folders or try and find your stash of dirty videos.

Remote control any computer or Mac over the internet within seconds or use TeamViewer for online meetings. Find out why more than 200 million users trust TeamViewer! 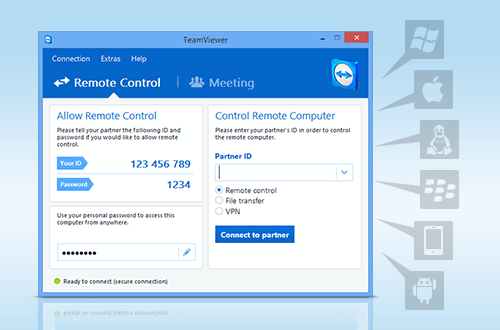 Whether you provide spontaneous remote support, administer servers or work from your home office, TeamViewer gives you the possibility of being able to control computers remotely as if you were sitting right in front of them. You can provide technical support to mobile devices such as iPad, iPhone, iPod Touch and Android devices. You can do all this conveniently from your work station. 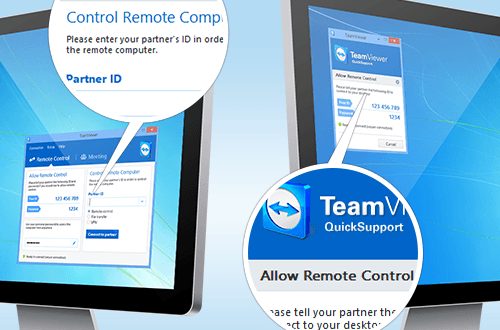 Do you need to provide daily remote support to customers and offer quick, on-the-spot solutions? You can easily control your customer’s computer remotely with TeamViewer, as if you were sitting right in front of it. With the customer module TeamViewer QuickSupport, you can remotely connect within seconds without the customer needing to install any software. 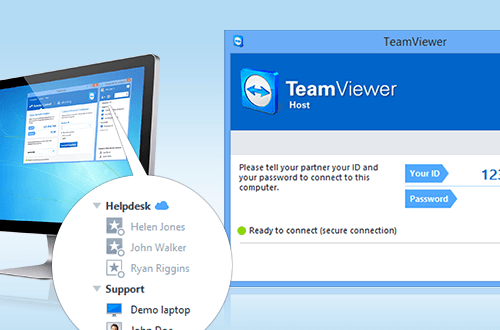 Administer remote computers and servers anytime, anywhere as if you were sitting directly in front of them. If you save the computers or servers as a contact in the Computers & Contacts list, you can connect easily with just a single mouse-click! Wake up unattended computers that you do not wish to leave on all the time with Wake-on-LAN.

The module (TeamViewer Host) for 24/7 access to remote computers is free for license holders! 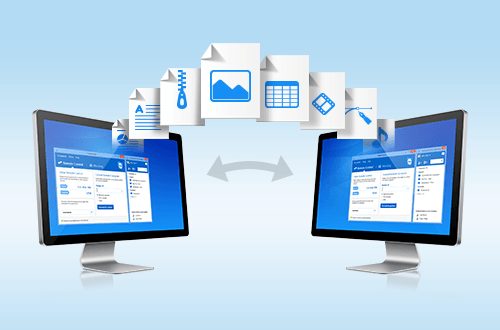 Conveniently transfer files to and from the remote computer during a TeamViewer session. Use drag and drop, copy and paste via the clipboard, or cloud storage to copy individual files and entire folders within seconds to any location. Send files to contacts in your Computers & Contacts list without first establishing a connection. FTP servers and size limits on attachments in emails are now a thing of the past!

TeamViewer mobile apps – for when you’re on the road 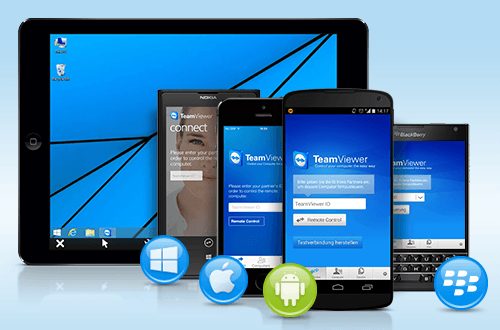 Are you often on the road and need to provide spontaneous support to customers or connect to your office computer or customers’ servers? The TeamViewer apps available for iPhone, iPad, Android, Windows Phone 8, and BlackBerry enable you to be flexible in terms of how and when you connect.”

——————— (this line symbolizes the end of marketing mumbo-jumbo from the official website).

So with that out of the way, TeamViewer is free as long as you select private use on the installer and you use as it such (yes, they can tell). On a personal note, it’s stupidly expensive to use with a professional license but it is incredibly efficient and easy to use for anyone that will ever need someone remote help or simply want to be able to access their computer when not at home and because of this, TeamViewer is my Application Thursday program of choice.