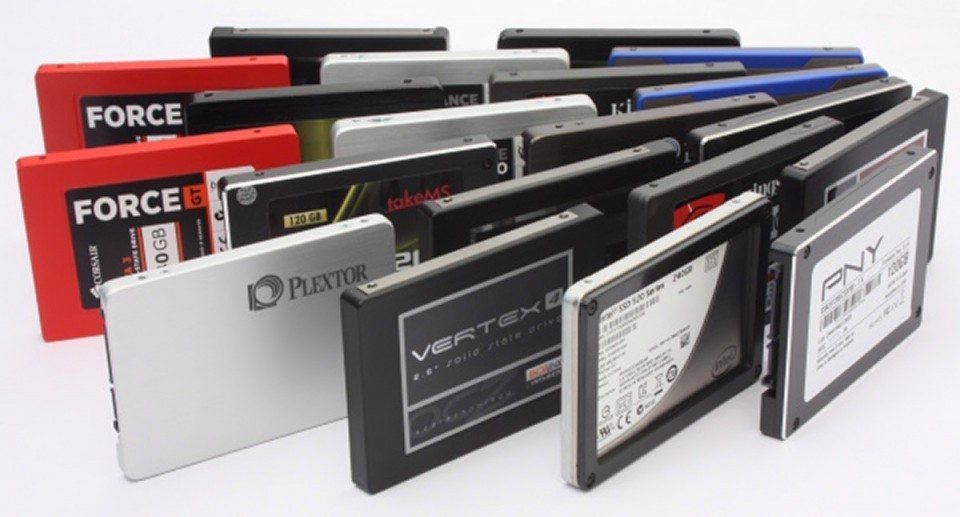 An SSD or “Solid State Drive” is, by all means, a Hard Drive, meaning it fulfills the same function. It’s where your Windows is installed, where your programs are installed, where your music, photos, and documents are stored. So, if this is true, what’s so different between an SSD and a conventional Hard Disk Drive? In order to explain what it is, we first need to analyze the differences. On this article I will only be talking about conventiona 2.5″ SSDs, I will talk about M.2 and PCI form factors in future articles. Let’s see what Wikipedia says about Hard Disk Drives.

“A hard disk drive (HDD), hard disk, hard drive or fixed disk is a data storage device used for storing and retrieving digital information using one or more rigid (“hard”) rapidly rotating disks (platters) coated with magnetic material. The platters are paired with magnetic heads arranged on a moving actuator arm, which read and write data to the platter surfaces. Data is accessed in a random-access manner, meaning that individual blocks of data can be stored or retrieved in any order rather than sequentially. HDDs retain stored data even when powered off.”

HDDs have been around since 1956, invented by IBM and you can see the technology has evolved immensely by the million-to-one scale except one factor. Average Access Time. What does this mean? Well, it’s the time your hard drive takes to access its sectors which is where your data is located. Now, have in mind that if you have a photo that weighs 1Mb, that 1Mb isn’t stored all together and neatly, this is called fragmentation and it’s why we have defrag in WIndows, so your drive needs to access many different sectors within it to get all the information needed to open up that selfie you took to use as your main Facebook picture. You may think, but That IT Guy, it says right there in the chart it takes milliseconds, surely we wouldn’t even notice? Well, that’d be true if all our hard drive was doing is getting the photo but our hard drives are constantly in motion working with temp files, cache, indexing and all sorts of operations Windows needs it to do to keep up with you. This specially affects Laptops due to the fact that in order to save costs 90% of laptops have HDDs with a spin speed of 5400RPM while conventional Desktops use HDDs with a speed of 7200RPM. And talking about Laptops, if you’ve ever dropped one you’ll have noticed that the first thing to break (even if the rest of the Laptop is perfectly fine) is the Hard Drive.

Hard Drives are very sensitive to knocking, the slightest impact can render them useless and this is because of the millimetric spaces between the platters inside and their reading heads (you may have heard a ticking computer at some point, this is its hard drive dying due to platter or head displacement).

So, now we know what conventional Hard Drives are which is what you’ll all get on a new Desktop or Laptop (unless they are very high-end, in which case you may also get an SSD). Let’s now find out what SSDs are and by the end of that we can compare the differences. As before, let’s see what Wikipedia has to say:

“A solid-state drive (SSD) (also known as a solid-state disk though it contains no actual disk, nor a drive motor to spin a disk) is a solid-state storage device that uses integrated circuit assemblies as memory to store data persistently. SSD technology primarily uses electronic interfaces compatible with traditional block input/output (I/O) hard disk drives, which permit simple replacements in common applications. Additionally, new I/O interfaces, like SATA Express, have been designed to address specific requirements of the SSD technology.”

The first thing that catches the eye is that it contains no actual disk (platters) nor drive motor which implies to headers either. What does all this mean? Well, the simplest way to explain it would be comparing it to a pendrive but on a bigger scale. Both use memory chips (in modern SSDs NAND Flash to be specific) but instead of being limited to USB technology (which putting aside modern USB 3.0/1, most people have USB 2 devices and connections which works at an average of 12mb per second read/write speed which is why all those films you download take so long to copy to your pendrive) it uses SATA technology which is the modern-day standard connection for hard drives. If you both a PC or Laptop within the last 3 years, chances are it has SATA 6Gbps connectivity… that’s 6144Mb/s max speed… which is exactly 512 times faster than a pendrive. To be fair however, most SSDs will have a read speed of between 400 to 560Mb/s which when compared to conventional hard drives that have an average of between 50 to 120Mb/s means that an SSD is 5 to 10 times faster than a conventional hard drive (you can see where this is going). We also have to take in to consideration the access times, conventional hard drives as we saw earlier take time to find the parts of the file you want to access because they have to spin-up and get the header to read the sectors on the hard drive that have those parts. An SSD has to… nothing. It’s flash memory which is indexed which means instant access time, no delay, no fragmentation.

What does that mean?

It means we get the full speed of the SSD almost instantly while we would only get the full speed of an HDD if the one file was big enough to allow it to reach that speed (and in 99% of cases, most files aren’t). Let’s put it in perspective with a real world speed test, using CrystalDiskMark (go ahead, click on it and get it from the downloads section and run the test on your hard drive). The test we’re running is a Best out of 4 passes on 1Gb files with 5 second intervals between passes. For the test I’ll be using a brand new Western Digital NAS Red 4Tb HDD which is considered one of the most reliable drives in the market and in fact it’s made to last. The second test is for a RAID 0 array of 2x Kingston HyperX 3K 240Gb SSDs so the results should be divided by 2 to get the real individual speed as RAID 0 greatly increases speed, you can read more about that here. The conventional speed is Seq Q32T1 so those are the results you want to look at. 4K is just what it sounds like, speed tests for very small files (which shows just how slow HDDs are in terms of access time). For the results, higher is faster. 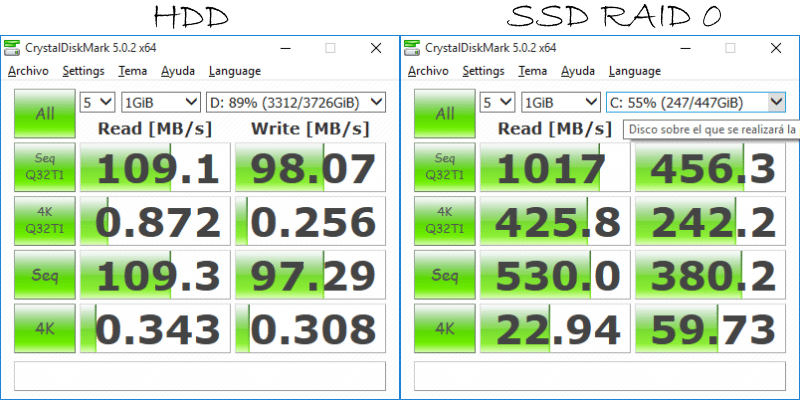 You can instantly see that while the SSDs are in general terms (which the overall READ/WRITE speed, so “Seq Q32T1”) considerably faster, they are also so much more faster in 4K Q32T1 tests (400 times faster) due to the instant access times and that’s really what you want as most drive activity on your computer will be small files. And this is just the start as SSDs are getting faster all the time and the models I used in this test are almost 4 years old!

While speed is, of course, very attractive (Windows boots up in just a few seconds and programs open up instantly even on lower end machines), it is not the only advantage. You see, SSDs have no moving parts which means they are unlikely to break due to being knocked being by dropping the drive or dropping your laptop with it in it. They also consume much less power (a LOT less) which means your Laptop’s battery will last longer or you’ll simply get smaller electricity bills for your PC. They are compatible with any computer of any form that has a SATA connection of any generations which makes them compatible with pretty much any computer in the last 8 years. Because of their speed they are ideal upgrades for really old computers that just can’t keep up as they provide a fresh breath of life due to their speed even if they are limited by older SATA connections (max of 250Mb/s.

And here’s the big “BUT”. Prices. The price per Gb (which is the standardized pricing scheme used for storage) is much higher than on conventional hard drives. For the price of a 1Tb (1000Gb) conventional Hard Drive, you can only get a 120Gb SSD, that’s 10 times less space. A 1Tb SSD will set you back around 400USD/330Pounds/370€ so they are not ideal to use as storage at the moment but, this is ok because what I always tell my clients is the following. If you’re upgrading your PC, buy a 120Gb SSD and install Windows on it, install your programs and store your files on your old conventional Hard Drive. For a Laptop, buy a 240Gb SSD and a 2.5 HDD external enclosure. Take your standard hard drive out, put it in the usb enclosure and stick the SSD in the laptop. You now have a much faster Laptop and have recycled your old hard drive to be used as an external usb hard drive to keep your files (which also doubles as backup!).

Prices, however, are going down all the times as the SSDs get cheaper to manufacture (supply and demand). Intel has said they want to offer 100Tb SSDs by the end of 2018 and that’s one of the biggest advantages of SSDs, their storage capacity isn’t limited by the size of platters like conventional HDDs but rather the size of transistors used to manufacture their memory which is getting smaller all the time as it’s the technology used on many other kinds of products.

Conclusion: Give your Laptop or PC, no matter how old or new it is, a new breath of incredibly fast life. Check back on Monday for a tutorial on how to swap drives over both on Desktops and Laptops.